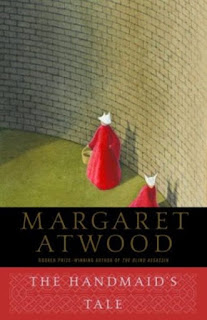 Dystopia has never been my preferred genre, thanks to the very many badly written YA literature strewn around the world that befalls into the said genre. My problem with the genre is that they are unrealistic and too far fetched to live through the book. Yet there were several times while I read the book The Handmaid's Tale

that I had to recheck the publishing date.

Set in not so distant dystopian future, women have lost all that they won in the recent past, at least partially - the ability to chose what they wore, what they did for life or even handle money. They are forbidden from reading, writing and even speaking freely. Their existence is based on their functionality - the wives (in charge of the household), the helps (Marthas), the teachers (Aunts), the wombs (Handmaids), the sexual toys ( Jezebels) and the outcasts (Unwoman) are sent to Colonies where they are left to harvest cotton or clean up the radioactive waste.

Offred, our narrator, a handmaid belongs to Fred, who is on her third and final attempt to conceive a child with a government appointed 'Commander.' Every month she has an impersonal intercourse with the Commander and his wife, who is barren. She had had a child with her husband Luke (a divorcée from his previous wife), before she became Offred and before her marriage was declared void. Everything changed overnight. Money was replaced, women were declared to belong to their men and were offered 'safety' and 'respect' than they were in the free modern world.

She is desperate to figure what happened to her family, to know what is happening in the world outside the wall, to read write and just to live. She is given a friend Ofglen, who is accountable for Offred's actions while she runs errands and her for Ofglen. Offred falls for Nick, the Guardian for the commander, a crime that could lead them both to be publicly hung. Was the risk worth taking? Did she learn anything about her family? Read to know more.

Written in the 1980s and still, it has not lost its relevance may reason out why the book is called a classic. If anything, The handmaid's tale has become more and more pertinent today, given the current world scenario. I hail from a nation where rape seems to the screaming weekly headline, where feminism is more or less a topic for the keyboard warriors and reservation and rationing are the only ways to go by.

Incidentally, I live in a country which believes in 'respecting' women, 'saving' them from men, yet are not allowed to make decisions about their unborn fetus. There are nations where women are not even allowed to drive or make a visit to the mall without a proper chaperon. Let us not forget the wall that our dear Mr. Trump has promised to build to protect us from the immigrants and the religious terrorism he is raging against.

You guessed it right, every one of these actions is a fragment of imagination that Margret Atwood takes us through in her novel. And you know what? Somehow we are all conditioned to living and adapting to these rules, that we no longer think that we are complying with them but accepting them as the way of life. Yes, I no longer feel The Handmaid's Tale

is a far-fetched work of fiction.

might be a little hard to get into, yet once you are into it, you can not stop it. I started reading the book and heard the rest of it when I was out and about living my life because I could not put it down. The narration is not linear, there are places where you might be confused, especially at the initial parts, but it will grow on you. And oh, I loved the emphasis thrown on the importance of the written and spoken word in creating a new world, as any bibliophile would.

And my dear grammar nazis, yes there are a lot of commas, quotes and other generic rules that are broken, but somehow it works. In fact they make it better. (Mother Earth can swallow me). There are too many seemingly simple lines that make them powerful quotes for that very reason. The ambiguous ending works so well that I cannot stop pondering over. I am yet to watch Hulu's take on the book as a TV series, but it is on my to-do list.

You can not read The Handmaid's Tale

as a breeze through the weekend read. You can not unsee once you have been to the Republic of Gilead and not relate it to the real world. If you are one of those who gets offended by the term 'feminism,' read the book with an open mind. Given the current state of chaos, we live in you will relate to it.